Which phones will get Android 5.0 Lollipop first?

It’s been given a visual and technical makeover – which Google says will give users a more intuitive, faster and consistent experience across devices.

For example, Google says that with Lollipop it’s easier to pick up where you left off on one device so songs, photos, apps and even recent searches can be immediately accessed on another Android Lollipop device. There’s also a consistent design across devices, which Google has branded Material Design.

You will also be able to change your settings so that only certain notifications and people get through – including the ability to respond from your lock screen.

A new battery saver feature could prove popular, extending device use by up to 90 minutes.

New security features include new devices coming with encryption automatically turned on to protect data in case it is lost or stolen. Lollipop also allows you can secure your phone or tablet by pairing it to a trusted device like a smartwatch or a suitably enabled car.

At the same time, with Lollipop it is possible to share a device with friends and family – for example a guest user being able to use it but not your data. A user can also log onto another Lollipop phone to make calls or access messages, photos and so on, if they forget their own phone.

Google is also rather keen to stress that Android can power your phone, tablet, watch, TV and even your car.

What phones, tablets and devices will get Android 5.0 Lollipop first?

Android 5.0 Lollipop will come installed on the new Nexus 6 phone, Nexus 9 tablet and Nexus TV Player – and will also be available on Nexus 4, 5, 7, 10 and Google Play edition devices in the coming weeks, according to the official Android blog.

Sony has also revealed that it will be making its Android “L” upgrade available to all of its Z series of mobile phones and tablets – with the Ultra Google Play edition devices first, with exact dates promised soon.

Phone manufacturer HTC says it will update its One Family series of devices “as fast as possible”. The roll-out of updates to the HTC One (M8) and HTC One (M7) will begin worldwide within 90 days of getting final software from Google, according to a popup on HTC’s software update webpage.

Tech website Techrader has suggested that most of Samsung’s high profile devices released in the last 18 months to 2 years with get the update.

The Galaxy Note 4, Galaxy S5, Galaxy Alpha and Galaxy Note 3 are likely to get Lollipop soon after it launches, according to the report, probably within a timeframe of several months, while the Galaxy S4, S4 Mini and S5 mini potentially getting the update a little later. 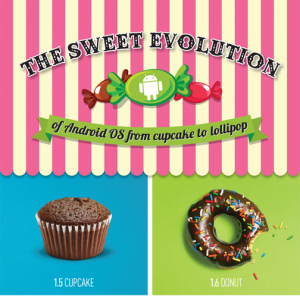 End of the line for new Nokia branded phones?

Protect your device with a case – click here to see more

The evolution of Android o/s [Infographic]