A usable chocolate teapot: a sweet way to brew tea

jon
facts, In The News, technology
No Comments

It’s a well-worn phrase to describe the shortcomings of a person or an item. But the phrase “as much use as a chocolate teapot” has been literally disproved – with the development of a usable chocolate teapot that doesn’t melt when filled with boiling water. 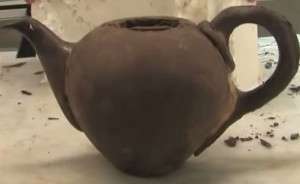 Boffins based at confectionary company Nestlé’s base in York, England, used dark chocolate with 65% cocoa solids so the low fat content would hold hot tea. The fat in chocolate is what makes it melt when placed in the mouth.

It took several modifications and experimentation to get the right level of chocolate thickness to withstand the hot tea with Nestlé Master Chocolatier John Costello leading the team, reported the company. The chocolate tea pot arose following a challenge by the BBC’s The One Show.

Hilarious take on Apple ads: Ikea unveils the bookbook in video
Pedestrian lanes introduced for mobile phone users in China
World’s “largest” capacity SD memory card unveiled: 512GB
The man with one of TV’s most heard voices (although you may not know his name or face)

7dayshopas useless as a chocolate teapotchocolate teapotNestleYork
Search this Blog:
Recent Posts
Categories
Archives
Things to follow & do
Looking for something?